I was inspired to paint after seeing the new mount option in Guild Wars 2! It’s a “roadrunner mount,” but I was very excited because it reminded me of a mount idea I had a while back:

This mount idea is based off a greater prairie chicken, which is one of my favorite chickens! They are beautiful creatures.

I tried to recreate my mount idea in-game using the dye system, and though I did not really succeed, I am happy with my turkey mount, haha:

This screenshot is heavily edited, as I’m currently on a laptop with integrated graphics. GW2 runs surprisingly well on it, but I wasn’t able to find an area that lit the character models well enough for us to see them. I’ll post the original screenshot below!

Anyway, here is what I ended up sketching!

And now for the thoughts about cynicism in today’s media entertainment!

While painting the above tonight, my mind started to idly wander about general thoughts regarding media entertainment. We finished the season finale of The Boys earlier tonight, and I’m sure this what prompted tonight’s meandering thoughts.

The primary thought is this: I can’t get into shows that revel in celebrating the worst in humanity.

There is a certain cynicism that pervades many of today’s most popular entertainment media. I think this is why many modern shows haven’t clicked with me, and the ones I do enjoy seem to be fighting for a widespread audience (with Cobra Kai being a welcome exception). My two other recent favorites, Person of Interest and Dark Matter, were both cancelled after only 3 or 4 seasons!

Let’s take Cobra Kai as an example. Cobra Kai introduces itself in a very deliberate way, which in the current media climate of “dark and gritty, humanity is irredeemably evil,” you think will go in a predictable way.

The show then shatters this expectation. Instead of taking the predictable route of a villainous, irredeemable main character – as he is introduced – the show instead invites us to ponder the idea of bettering ourselves and, in doing so, bettering the world.

It allows us to ponder this in a way media like Westworld, Game of Thrones, Black Mirror, The Boys, or The Witcher instead seem to choke out this desire in its audience – the desire to believe there is good in humanity, and that people are redeemable and can become better versions of their past selves.

These shows seem to desire bludgeoning their audience with a sledgehammer under the premise that humanity has little to no positive qualities, and that humans are overwhelmingly irredeemably flawed creatures.

Maybe I’m an overly optimistic Star Trek fan, but as long as we aren’t naive about it, I don’t see any negatives to aspiring to be our best selves.

Wow! It’s been five years since my last post to my sketchblog. Are blogs still a thing? Do I even know anyone who still keeps a blog?

I’m kind of drawn to the relative anonymity this blog must have now. I loved blogging, and the only reason I stopped was because posting would take too much time with each entry. That, and also because social media basically replaced casual/personal blogging.

I think I’ll try writing some entries here though! I miss writing in general. I’ve been doing more personal writing lately, and it’s been great fun developing stories and themes.

But first, let’s update this blog with some recent work.

I’m not even sure which artwork I should post here first – where to begin after five years! This post will likely be a little haphazard, but let’s embrace it for the time being – I can always do more concise follow-up posts later on.

Let’s start with something I posted earlier today on social media – a rough painting of Vaknaa! Vaknaa is now one of my older characters. She is the same character in my last post from 2015.

I’ve been playing around with her design lately, though I’ve tried tinkering with it in all the years since 2015. I’ve always wanted her design to combine human and avian features, but I was never completely happy with the designs I came up with so far – I’m not sure if I’ll keep this current design of her, but it’s been a lot of fun to paint with in the meantime!

I should post some of those other designs here sometime – there are a lot of designs I haven’t posted anywhere because they don’t seem like things I particularly want to share on social media, but they’d probably be suited to a personal blog like this.

I’ve made a few other sketches of this design this week – actually, I think I’ll post them here now. It’s interesting how used to I’ve become with social media – things I’ve become used to adhering to, like staggering posts as to not potentially annoy anyone with too frequent updates.

It’s kind of freeing to not have to consider that at all with a blog like this, since this is mainly just for my enjoyment, as I can’t imagine how difficult it must be to have traffic to a blog nowadays.

Rough sketch of Vaknaa – I’ve been playing around with a much looser, possibly more expressive style lately. It’s been really enjoyable so far, which is a little surprising for me, because traditionally I’ve been told my artwork can be on the tight side, sometimes too much.

These were all painted this week, mainly as either warm-up paintings or break paintings. I’ve enjoyed painting them, and want to explore more paintings in this style!

Now that we have some artwork here, I thought it might be fun to do a brief recap of what the past five years have been like. I’ll probably put these thoughts under a cut.

END_OF_DOCUMENT_TOKEN_TO_BE_REPLACED 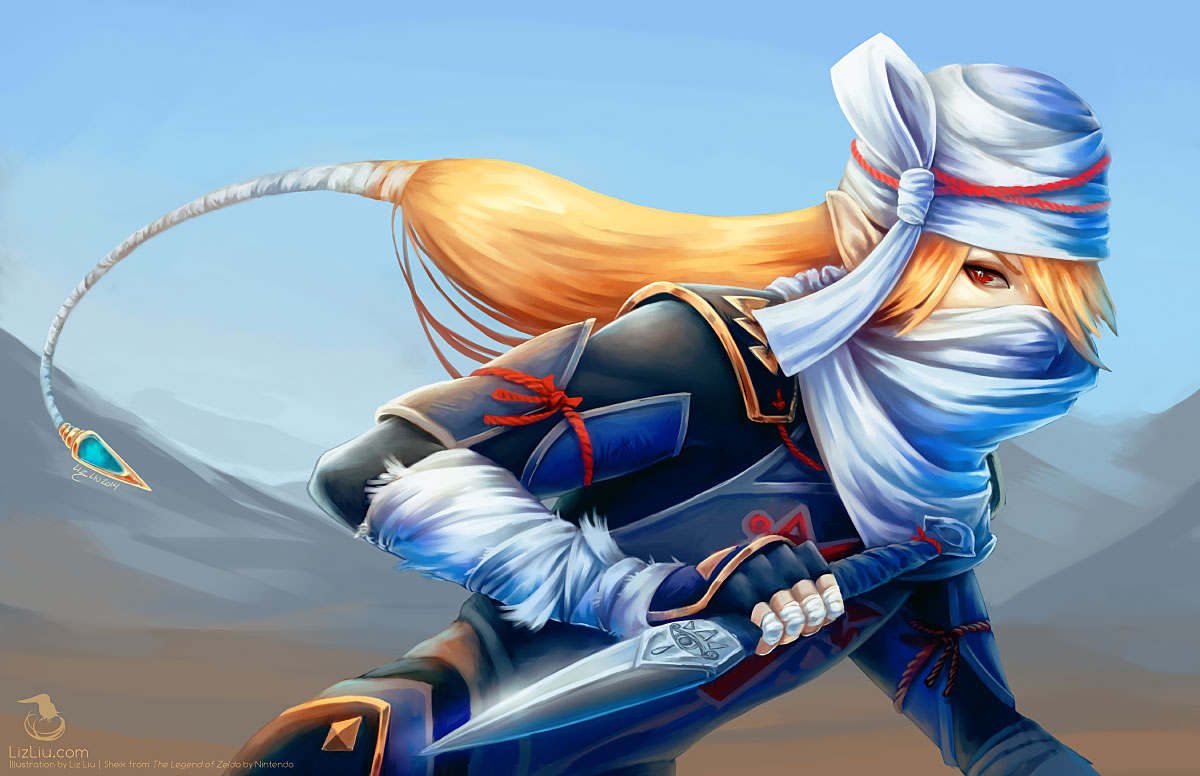 Some fan art of Sheik’s Hyrule Warriors design from about a month ago! Made a process video of it, and uploaded it to YouTube:

It always kind of amazes me how much I enjoy video editing when it’s just for fun, and not for work/a job.

I’m making some hastily put together ref sheets for an art secret santa event, and finding it really fun to type out some of the character info. I’d like to make nice ref sheets for some of my characters, but who knows when I’ll have time to do that, so the actual ref images are taken from finished or mostly finished paintings, and some random or old drawings I have lying around, many which I haven’t posted to anywhere because they’re poor quality. But in terms of being useful as a reference, they’re are probably adequate. Or the best I have right now, in any case. Desperate times call for desperate measures, haha.

But it’s cool, because I mostly keep any written character info and character sketches separate (text document vs PSD file), and this is one of the few times where I’m seeing the text info alongside some images. How I’ve painted seems to have fluctuated a lot, and it’s kind of neat to be able to see that all in one reference sheet. It’s probably just interesting to me.

A crop of Spectros from a wip before linking some music videos for a new band I started listening to!

END_OF_DOCUMENT_TOKEN_TO_BE_REPLACED

Posts from this month